How to use Samsung Pay in India using Galaxy devices 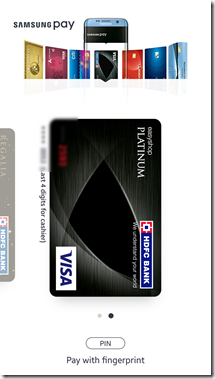 I had the opportunity to receive an update on my Samsung Galaxy Note 5 for the Samsung Pay app. Back then when Apple launched apple pay they marketed it as the next wave of payments and (as usual) just with yet another Apple ceritified payment terminal payment could be as easy as waving your iPhone across the counter when you were with a merchant.
However Samsung had to do something to counter this onslaught of Apple and they looked at this whole payment thing in a different light. What if they could replace card swipes across existing payment terminals with an app (and needless to say some hardware technology) ? They could then pull the carpet under Apple’s feet. And that is precisely what they finally did. Launched Samsung Pay. An innovation that did not need any change in existing hardware at any merchant. The only thing was that Samsung had to align with the banks for virtualizing their cards on the phone or equivalent devices such as the smartwatch and it was pretty much done.
This whole thing became so seamless that you could use it from day one. Its unfortunate that while the feature was already available since 2015 end in other countries it has made it to India only by 2017 which is really late and I hope Samsung learns from this. But then demonetization, alignments with banks, etc have impacted the launch a bit and they had to clearly plan it out. Alignment with banks in India is still a cumbersome process but something Samsung has finally completed. Not all banks participate with Samsung but many are about to sign up and you already have the major ones such as SBI, HDFC, Axis and ICICI on board. Standard Chartered and Citi are on the way too. Given these biggies control most of the banking market in India, pretty much many of these cards would then be covered under Samsung Pay. 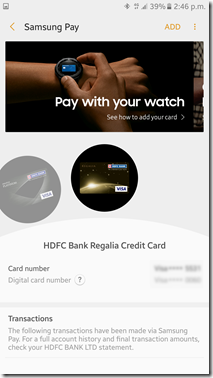 So what really does it take to use the application? You need a supported version of a Samsung smartphone such as Samsung Galaxy S7, Note, etc  or a smartwatch such as the S2 or S3 series. You need to install the application, add your credit or debit cards that are supported by the application. Adding a card involves authenticating the application to use your bank details by verifying an SMS sent to your registered mobile number. Its really that easy. And you are done. As for the smartwatch you can install Samsung pay application which is specifically tuned for the watch and add the same cards there as well.
Walk over to any merchant near your house, make a purchase and when you are about to pay, fire up the card by swiping up from home screen, choose your card, and you have options to pay using PIN or fingerprint. Once you input either of those an MST (magnetic secure transmisison) happens and your card data is provided to the card reader. Then on you still need to enter the 4 digit PIN for your card and your transaction is completed.
The same thing works from both the Samsung S3 frontier smartwatch as well as the smartphone and will be a big boon in how easily a payment can be made. Imagine taking out the right credit card from a bunch of cards in your wallet? Those days are over. And if you have a watch, even the days of using your smartphone to make that credit card payment will be over soon