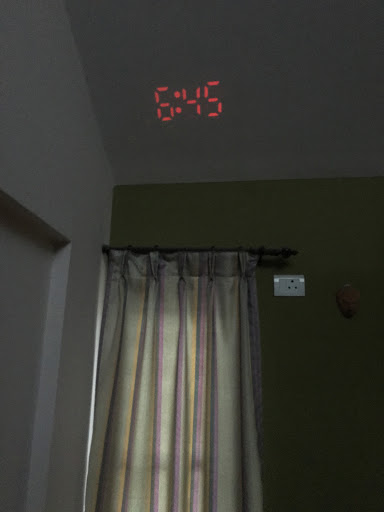 From a long time I had one drawback being myopic. If I removed my spectacles while sleeping at night, I could not read my clock no matter how near it was. It was annoying to switch the light on, or use any other means to read the time. The last thing I needed was to do all this to disturb my sleep and others' sleep around me. 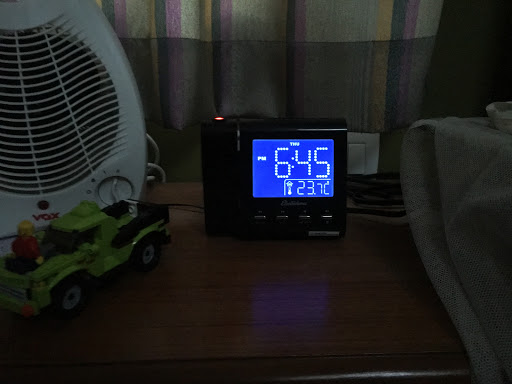 In India there are innovative and useless solutions for these things at the same time. Like the talking clock which was like someone spooking you from the dead in the middle of the night, to Ajanta's huge big LED clock that required a 220V AC supply which it had to be tied upto in order to display a red LED schemed clock somewhere high up on the wall. I was always yearning to just lie down on the bed, and know what the time was without audio hints, or switching on the light or disturbing others. 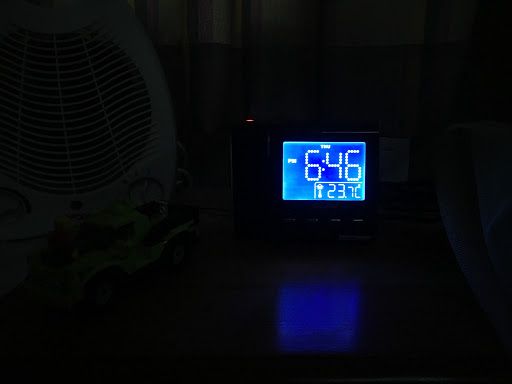 Enter the electrohome projection clock sold on Amazon.com. From a long time I was fascinated by projection clocks, but never really understood how difficult they would be to maintain over a period of time. Plus the nuisance of their availability only abroad meant that I could never ask someone to get me one or even buy it myself simply because it would not be shipped to India.

I had a chance to go to USA on an official trip, where I decided to order this off Amazon to fulfil my long standing desire to own a projection clock. For 29.99$ this was not very expensive, so I went ahead and ordered it. Amazon shipped it to me promptly enough. The one drawback in year 2016 was that these were still being shipped with 110V power adapter instead of having a universal 110-220V one, which meant I had to do more gimmicks to get it working in India. I had to plug in into a crude step down transformer to ensure I did not blow the device up by mistake. Once I setup the device, I was rather pleasantly surprised, and very happy with the investment made on the most important feature of the clock - the projected clock face. The clock projects via a red LED, the time to the nearest point on the wall or ceiling. And the digits were huge, and could be read at any time of the night with or without spectacles, even if you were in half sleep. I have even tried reading it through a mosquito net (commonly used while sleeping in a country like India) and it was still quite legible. However I must point out here that projection it to a rather far off surface beyond 10 feet may not yield great visibility all the time. 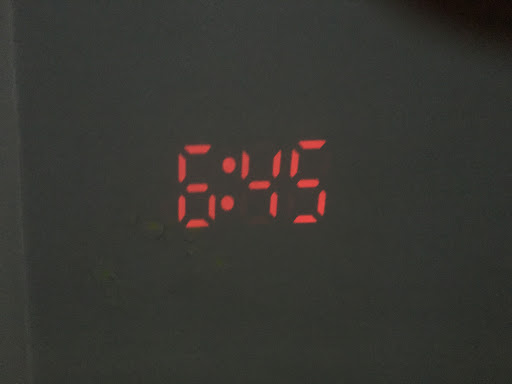 With two alarms, a button to switch the clock face by 180 degrees depending on how you would like to read it, and a soothing blue LED clock display with three brightness levels, and an add on FM radio, this thing is totally worth the 30 bucks you put on it. There are so many people who design something but the ultimate question is always on how usable it is eventually. In the case of the Electrohome projection clock, this is the best value for money 30 bucks can give you for a clock. Highly legible, highly non intrusive, always there for you on the ceiling or a nearby wall, bright and clear and with good amount of features - all these make the buy an absolutely valuable one. There are even focus controls for improving legibility on each wall you project the clock to. Further to that for a country like India, a feature where there is an internal battery to keep track of time in case of a power cut, adds all the more icing on the cake. And it even displays the ambient temperature based on where you have put the sensor to measure the same.

So should you buy one of these? Oh heck absolutely yes. Plonk 30 bucks and order it right now, and I give you my word, you would not be disappointed with the purchase. Be reminded that to use this in India, you need a step down transformer 220v to 110v. Plug it in, and enjoy the show.