The Green Embassy, Sagara - Why you must check out this hotel when you visit Jog Falls

My cousin arrived from United States of America and I had a chance to decide to have a backpack trip with him. It was a short decision to make and I had to hurry to make the best use of the time I had with him. For over 40 years I've never visited Jog Falls and I was always wanting to go there to see what it felt like to stand in front of the Majestic waterfalls of Karnataka.
We had to quickly book a mode of transport to get us there & also had to book a hotel for our stay there. Besides this we also had to find ways of reaching Jog Falls, seeing place and getting back to Bangalore within a day. The distance from Bangalore to Jog Falls is about 445 km and it roughly takes about anywhere between 7 to 8 hours to reach there. We had a few options to get there which included KSRTC, going by train or driving there.
I have given to many places already within India and I was kind of fed up of taking my car out for this journey. As one would expect getting train tickets is extremely difficult to go to this place since this route is always busy and many people book the tickets in advance. So that left me with only one another option which was KSRTC.
My cousin said he would take care of the booking for the KSRTC bus and my responsibility was to book the hotel in a place called Sagar which was close to Jog Falls. The train actually goes to a place called talguppa but it is a place which is a bit nondescript and has only a railway station there. Please bear in mind that this place does not have proper hotels or stay options although there are some homestays near by.
Your best option would be to go to Shimoga or Sagara. There are frequent buses from Sagar to Jog Falls and it would roughly take about an hour to reach there. Although Google Maps says that it's about 38 to 40 minutes one must factor into the route the railway crossing as well as the drive Downhill and again a bit Uphill to reach Jog Falls. Given this consideration and some wait time at the bus stand in Sagar it is better to keep about an hour for your travel to reach there.
I have already written a blog post about the KSRTC bus booking service online which you can read more about here. For this blog post I will focus on the hotel that we stayed in which was called the green Embassy in Sagar.


Criteria for the hotel choices

One of the main criteria that I had for choosing a hotel was that it must be very near to the bus stand or railway station or both if possible. Not only that it also had to have a decent restaurant as well as should be available at a value for money price. After doing a bit of research I did find that the gerusoppa kstdc hotel at Jog Falls itself was booked completely for the weekend.
Also since it was pretty expensive I had to choose something more reasonable. This is where I came across green embassy hotel which I finally booked.

The green embassy hotel is about 4 minutes by drive and about 10 to 15 minutes by walk from the bus stand or railway station in Sagar. This actually ticked my requirement for having hotel nearby. For the uninitiated this hotel is not a four or five star hotel but a more reasonable hotel in the area. It has nearly about three to four floors with a decent amount of rooms. 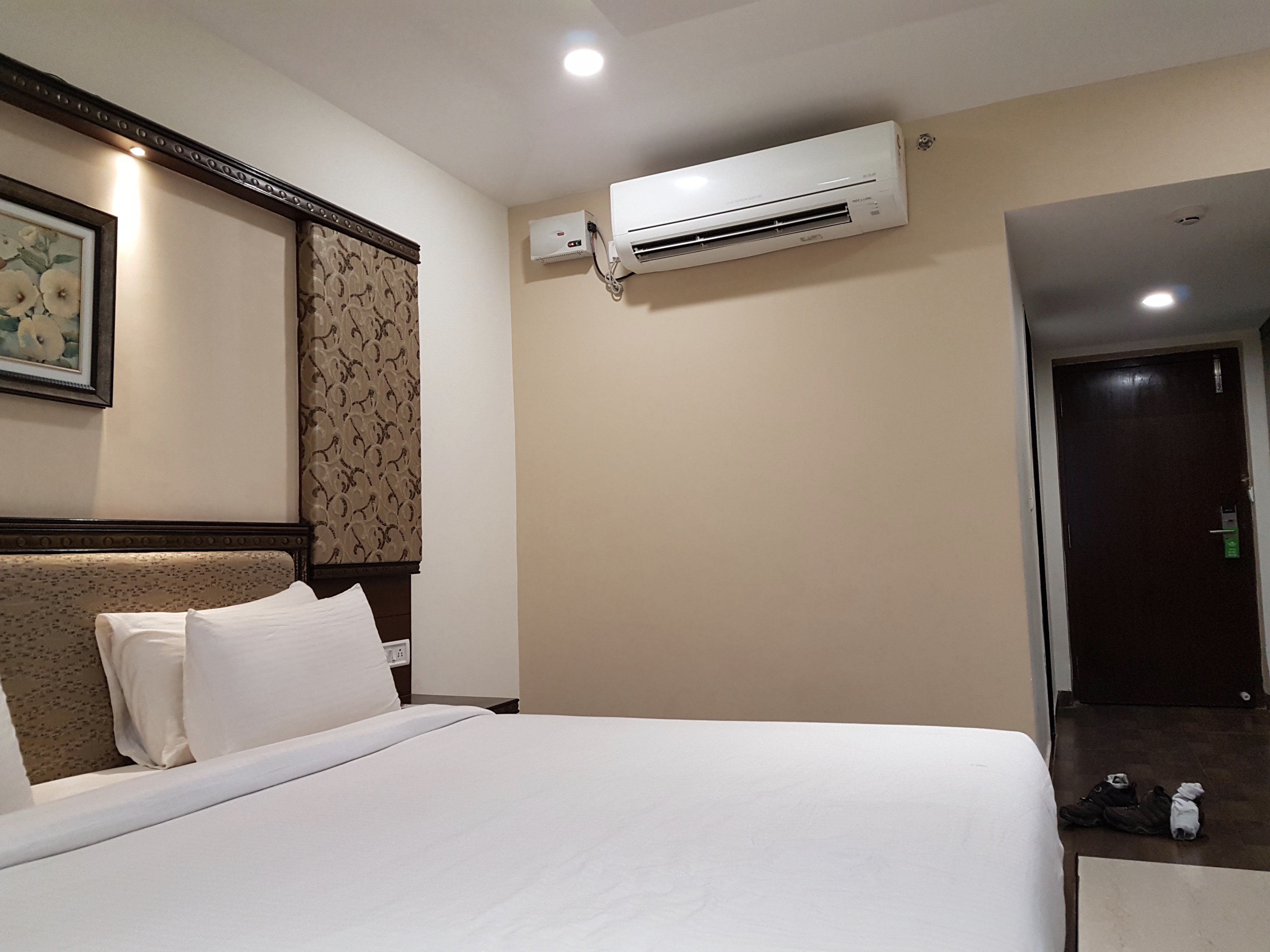 The rooms are surprisingly clean and had large Windows and curtains. The beds were large and neat and the room also had a writing table and the customary wardrobe in it. One of the most important things everybody Looks for while booking a hotel is how good the toilet is. I was pleasantly surprised with the toilet within the room. Again it was not of four or five star quality but then for what it was it offered a very neat Western commode a good large and neat wash basin, with all the toiletries kept beside it. 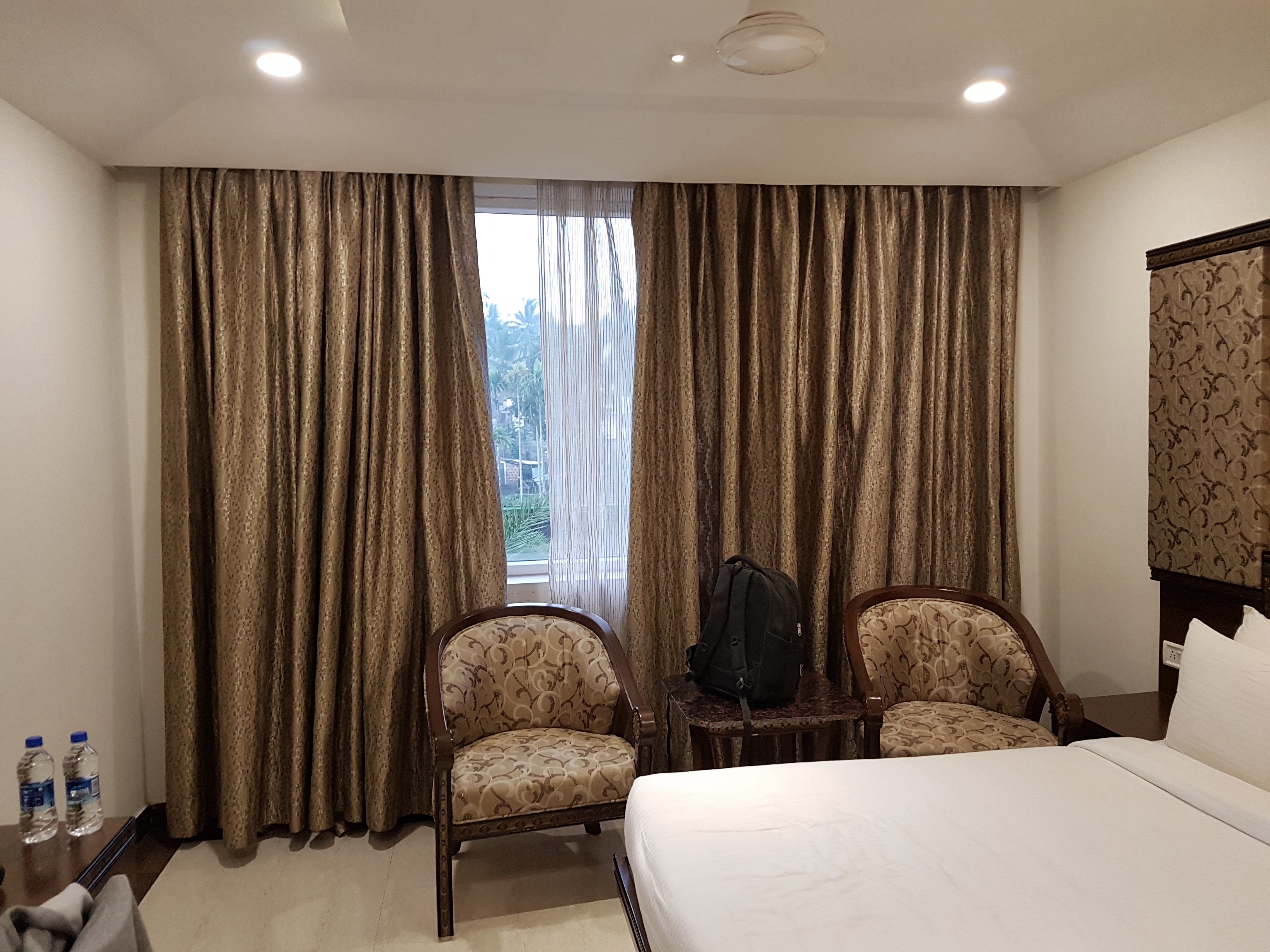 
The toilet also had a shower partition and the water was quite hot for a good satisfying shower. One of the problems I always have with hotels is the pressure from the shower. Sometimes the pressure is so low that the whole experience of having a good shower is lost. The green Embassy was good in that respect. 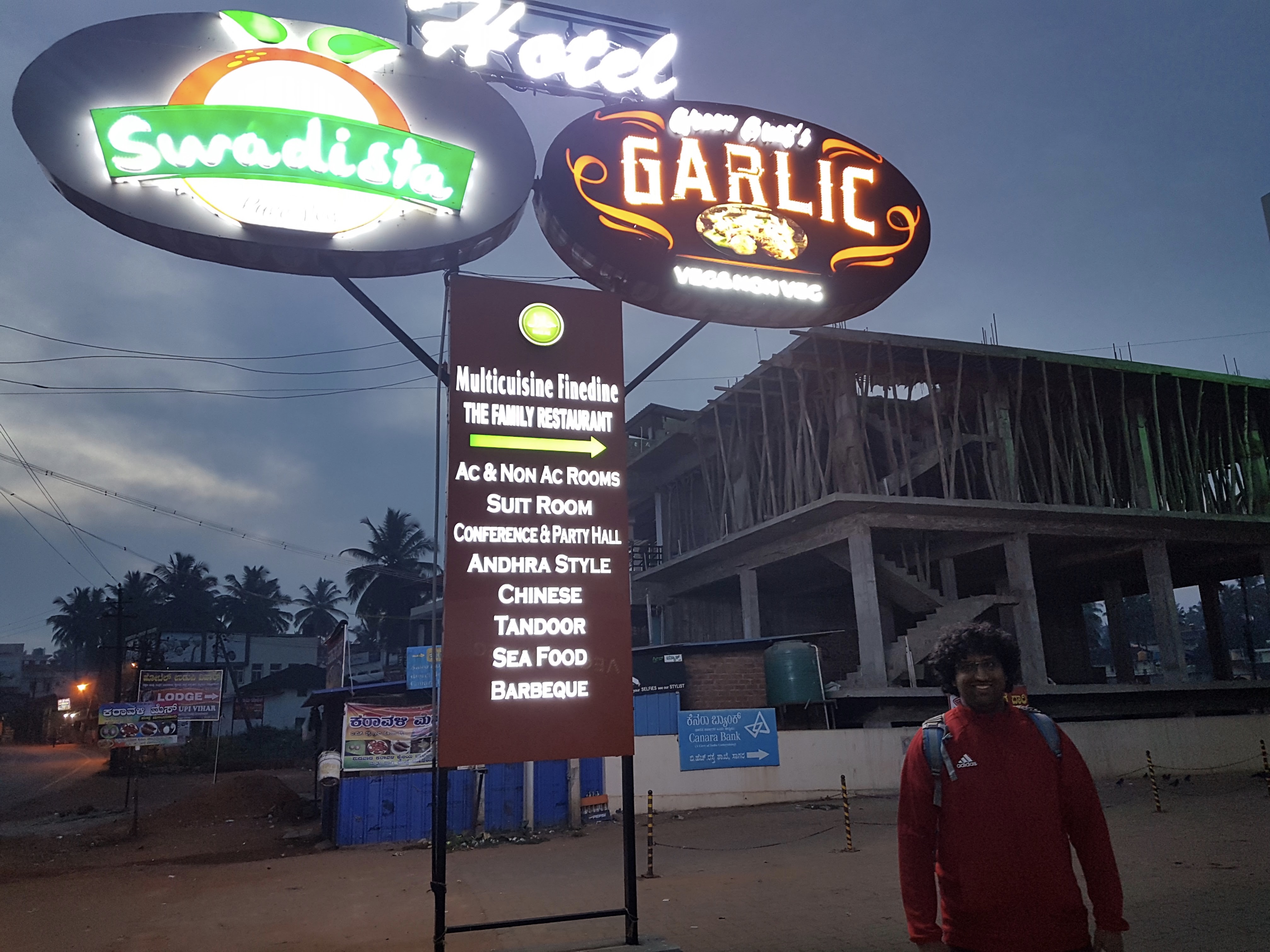 Breakfast was complementary along with the hotel cost per night but since we stayed only for the day we had to pay originally for the breakfast. The breakfast is not a generous spread, but rather a few items of the menu that the waiter will discuss with you. Based on what you like he will be able to make a the crispy dosa and serve you Idli and vada, besides offering a few other things like Hot and Cold beverages and a few other items.
There are two restaurants within the hotel one is called swadishta and the other is called garlic. One the first one is a pure vegetarian restaurant the second one is a combination of veg and non veg food. We preferred to have food in the vegetarian restaurant and hence could not get a chance to check out the garlic restaurant for the vegetarian choices there.
The restaurant itself was very pricey and for just a handful of items that we eat we ended up paying up to almost 500 rupees which was high in my opinion. Not to worry though because there are very good restaurants around the area just if you step out of the hotel. All these restaurants can be found between the hotel and the railway station as you take a walk. So if you are not in the mood for having pricey food within the hotel you can always step out for a walk to eat somewhere cheaper.
The food itself was good but it was not of the best quality that you get in other major towns. How it was still tasty and we liked it a lot.

I had already pre negotiated my time of arrival with the hotel and the chicken itself was pretty smooth and not a major affair. Our room was already ready by the time we reached Sagar.
Typical Hotel costs in These areas can range between 2000 to 5000 rupees. Green Embassy was somewhere in between. The room rack rate was 2000 rupees and we got the room at about 2300 rupees without breakfast. With breakfast it would amount to about 2800 rupees which is slightly on the higher side for a place like Sagar.
I also ordered a couple of beverages using room service which cost about 78 rupees.


The good parts about the hotel 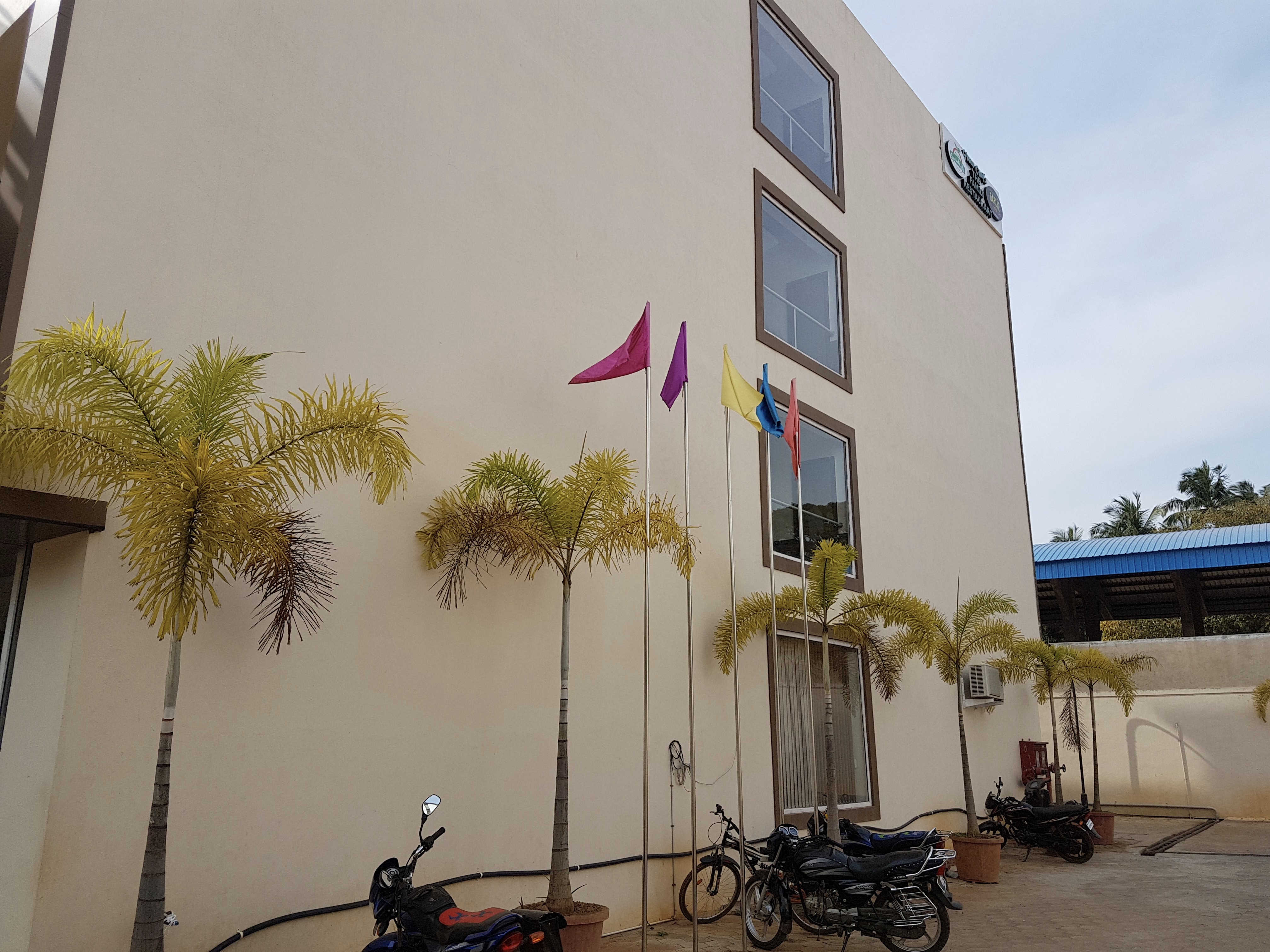 The bad parts about the hotel 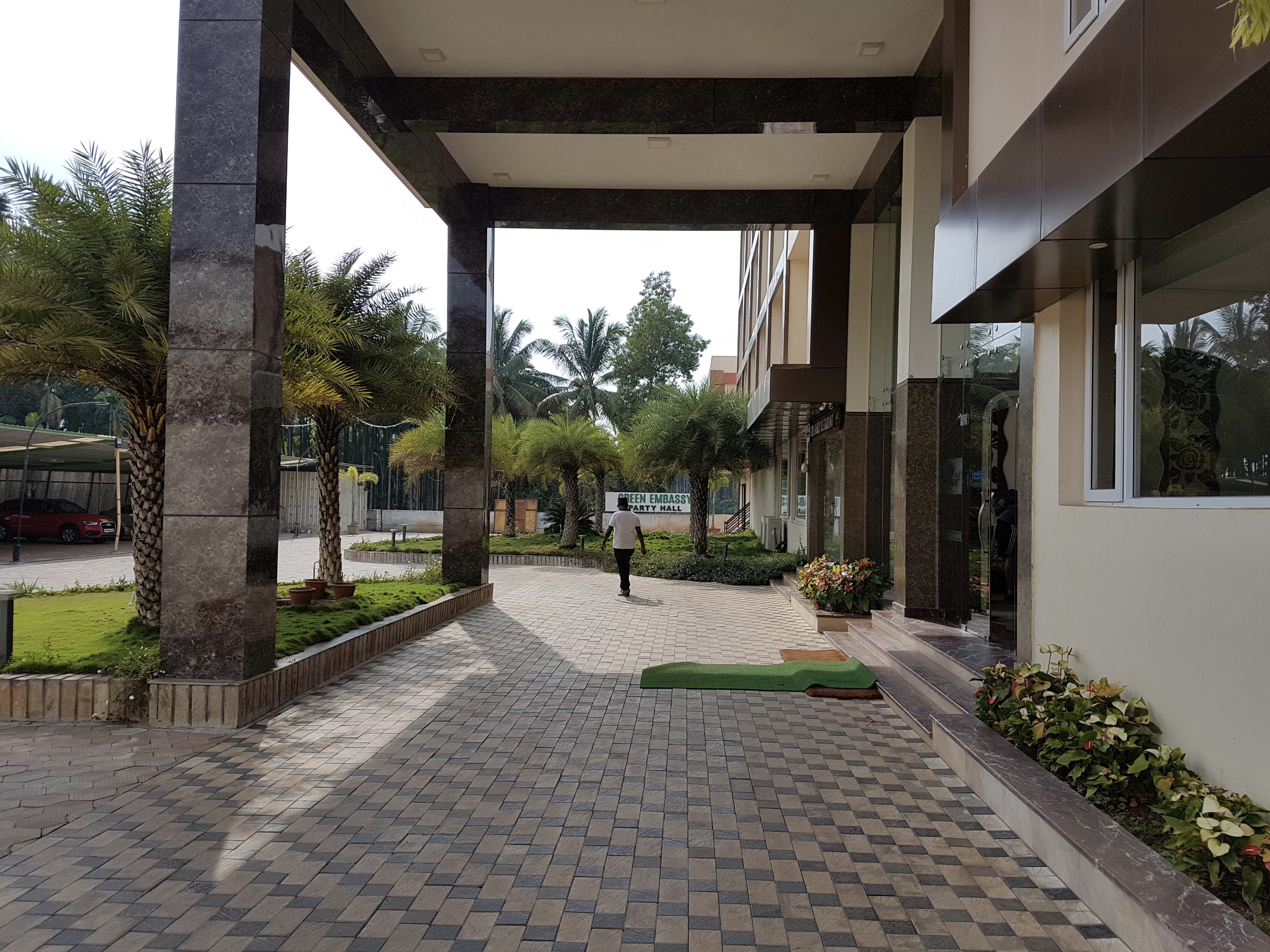 The Green Embassy is a very reasonable hotel for a place like Sagar. Its proximity to the bus station and the railway station makes it all the more likeable.

The varieties of restaurants available should cater to most people who want some good. The neat rooms and a friendly reception plus a reasonable car park and front entrance make this hotel good to stay in. 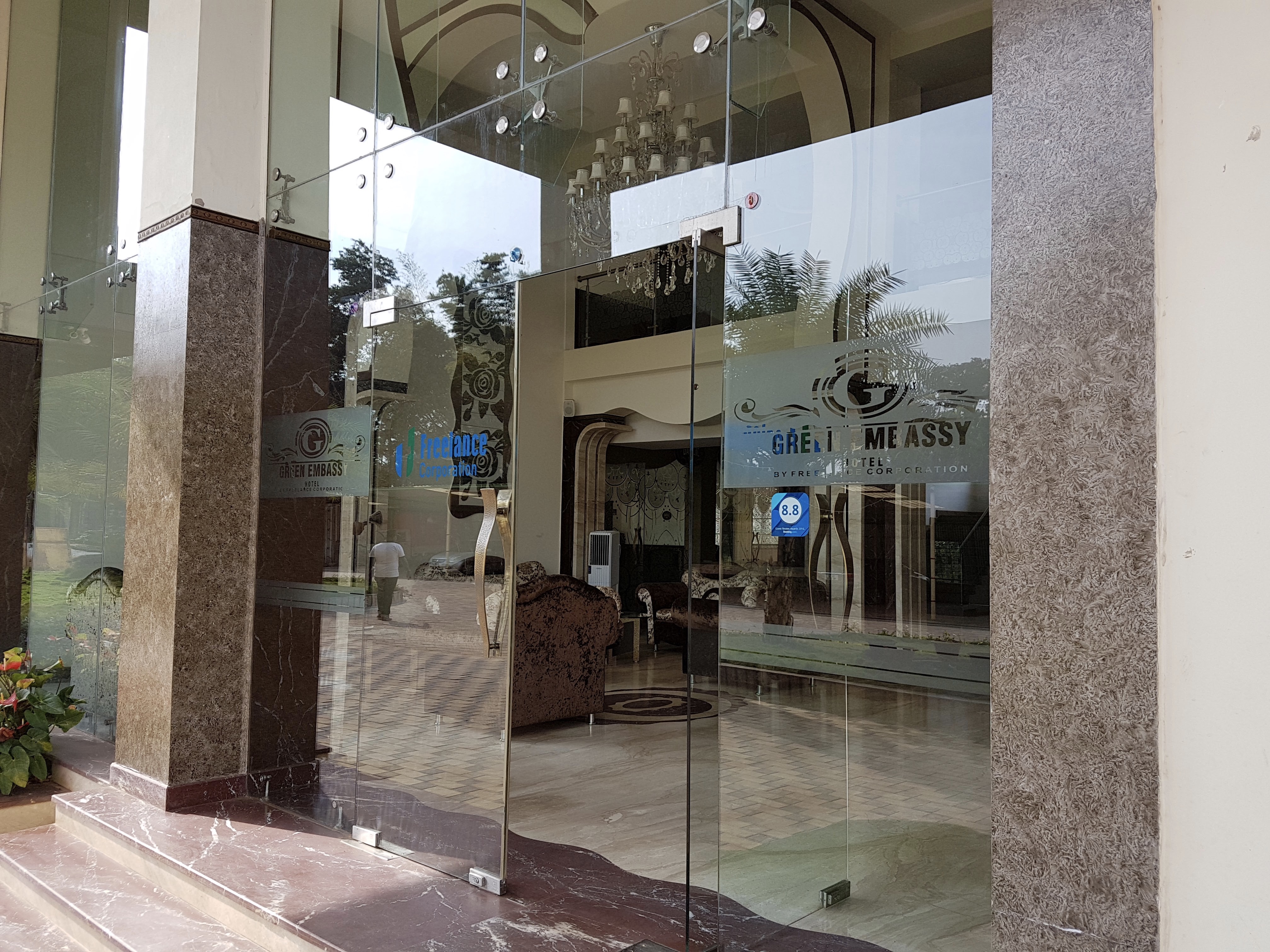 If you're going for short stay which does not involve breakfast you can negotiate the rates with the hotel upfront. The best way to get to Sagar would be by bus or by train. Driving there is pretty long distance and can make you tired.


If you like this post and you wish to visit Jog Falls please do share this with your friends. If you have any queries or comments type them in the comments box below.